The Dragon of Two Hearts: Book Two of the Star Trilogy

Home / The Dragon of Two Hearts: Book Two of the Star Trilogy 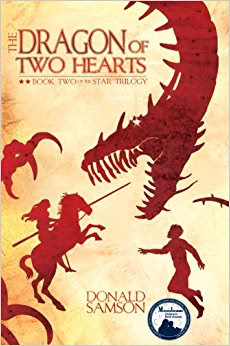 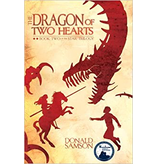 The curse of the wild dragon, Scorch, lies heavy upon the land of Gladur Nock. Scorch holds the kingdom hostage to his ravenous and bloody demands. The Knight Michael hears of the dragon's bane and realizes that the Luck Dragon Star had trained him for this moment. Full of foreboding he rides to their aid. However, before the knight can reach Gladur Nock he is ambushed and imprisoned in the dungeons of the very king he wanted to help. He becomes part of a forced training of arms. The best warriors among them are sent to fight the dragon. Oddly, King Worrah is in no hurry to free the land from the dragon's curse. The actions of the princess Aina are even more bewildering. She is a fierce warrior-maiden who oversees the men who will go to die in single combat with the dreaded beast. With whom can Michael align himself? The only way out of prison is to step forward as the next victim to go face Scorch., The Dragon of Two Hearts received a silver medal for Young Adult fantasy from the 2010 Moonbeam Children's Book Awards., The Dragon of Two Hearts has also received the coveted Mom's Choice Award for young adult fiction.

Author: Donald Samson
Grade 4 and up
Add your review
0 stars based on 0 reviews
Tweet